"There's a Snake in my Boot" 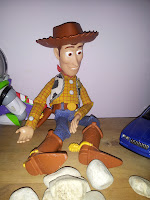 My husband and I were in his office talking when my oldest son comes into the room. He was supposed to be in bed. When I asked him why was out of bed he said, “Something weird is going on in the play room. Woody is talking by himself”.

You see Woody is the doll from the Toy Story movie and apparently he was talking and no one was pulling his string.  I sent our son back to bed and told him that I would be up later to see what he was talking about.  I figured that he was hearing things so I wasn’t in a hurry to go upstairs and check.  We had already done their bedtime routine so to me this was just a chance for him to get out of bed.

After my husband and I finished talking I went up to my boys room to remind them not to get out of the bed again when I hear, “There’s a snake in my boot!”.

I of course had to check on the doll but I really didn't want to.  Do you remember seeing the movie, Chucky?  You know the one about creepy talking doll.  Well thoughts of that movie were now in my head.  I made my way to the playroom, reluctantly, praying with every step might I add.  You see this doll was not only in the dark playroom, but it was in the closet in the playroom with the door closed and the lights off.

As I approached the door I said one more prayer and grabbed the doll.  Of course just to freak me out more, he spoke again.  I can’t remember what he said because I was just hoping his head wasn’t going to spin around.  I moved him around and pulled his string to get him to stop talking.  After he spouted out a few more of his sayings he finally shut up.  I told my boys that his string was just stuck and then went to my room with the doll.  I honestly didn’t want to bring him to my room, but I wanted to make sure he didn’t come on again and disturb the boys.  So I prayed as I walked with him to my room and thought to myself how silly I was being.  I mean really.  I can laugh about it now but if his head had spun around he would be in the trash.  LOL

Ah, the joys of motherhood.

Email ThisBlogThis!Share to TwitterShare to FacebookShare to Pinterest
Labels: Being a Mom, Laughter, Toy Story, Toys

My heart's desire is to be the woman God created me to be. I get to be that woman while being married a very patient man who is the calm to my crazy. I am also the mom of three boys each with their own personalities. I am living life and learning to find joy in the journey.