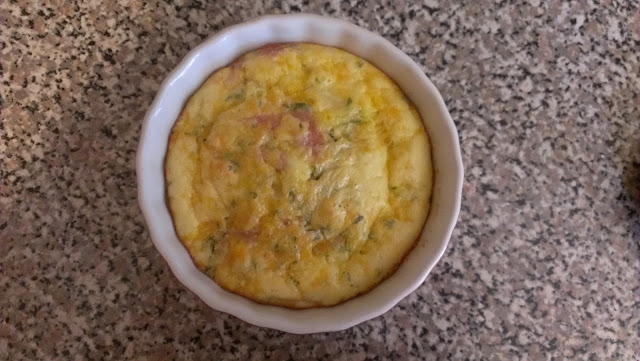 I love cooking and trying new recipes, so when I came across a recipe for a "Self-crusting Quiche" I figured I would give it a try.

There are times when I want a quiche but don't have any pie crust in the freezer nor do I feel like attempting to make one so I decided to try this.

I did adjust the recipe a bit by adding in what I had on hand.  I also split the recipe in half  and used two dishes that I got from the dollar store.  If you want to make a large one to fit into a pie pan just double the ingredients listed.

I combined all of the ingredients into a bowl adding the flour last and then baked in the oven at 325 degrees for 20-25 minutes.  Just check it around 20min to see if a toothpick inserted into it will come out dry.  If not leave it in and check after 5 minutes.  Note that if you are placing all of the mix into one dish baking will take longer.

I asked my boys how they liked it and there were mixed reviews.  One said it was good because he doesn't like pie crust and the other said he preferred the pie crust.  I agree with him, I thought that it was okay in a pinch but I would also rather use the pie crust.  To do that you can use the same ingredients that I have listed here minus the Bisquick and prepare it in a pie crust.  Remember to double the ingredients if you are going to do this.  I would love to hear how it turned out.  Enjoy!

My heart's desire is to be the woman God created me to be. I get to be that woman while being married a very patient man who is the calm to my crazy. I am also the mom of three boys each with their own personalities. I am living life and learning to find joy in the journey.